After my crabbing last month about how cold it was around here, you’ll be pleased to know that summer heat has come galloping into Paris like it’s late for a dinner reservation at Alain Ducasse.

I’ve taken to doing as much work as possible from one of those tables. I even have a favorite table in a favorite café; but I’m not going to tell you which café it is because I don’t want to have to wait in line. It’s very unfashionable anyhow, my café, and usually ignored by the tourists who wander into the neighborhood after making a wrong turn at the Opera.

This place doesn’t look like much. It is not Instagram worthy. The tables wobble, the banquettes are leaking springs, and the woman who does the daily menu board has lousy handwriting so I never know what the hell the specials are. (PEUV DE HORQUE? THROPRUE AVEC SPOGUE?) But Edith Piaf used to hang out here. So there.

The nicest thing about my work is how portable it can be. Right now I’m resting between big knitting projects and doing up a pair of socks. They’re absolutely screaming yellow, with dull green heels and toes. When the knitting is done, I’m going to embroider them. Don’t ask me what the yarn is. I don’t remember. It was in my stash, and I’m still trying to whittle away the stash so that the cat will stop complaining to me about the lack of elbow room in the apartment.

Who even knew cats have elbows?

I had the sock in my shoulder bag the other day when I was in the Marais running errands, and noticed that there was a prime corner sidewalk table open at a place that’s usually full to the brim. The weather was perfect, and I was feeling cute, so I decided to sit down, knit, drink a glass of something and watch people go by.

I was counting the stitches in my gusset, still waiting for my fizzy water (eau petillate) when I got the sense that someone was hovering nearby. The waiter?

Ha, ha. No. Not the waiter. One thing Parisian waiters never do is hover.

It was a woman, not three feet away, looking at me while doing her best to look like she was not looking at me, pretending to check her phone. She was taking my picture. But she had forgotten to mute the camera.

She jumped. She flushed.

I giggled. This isn’t the first time this has happened, and truly it doesn’t bother me.

And she flitted off like a Parisian waiter who knows you would like to order another bottle of eau petillate.

I should mention that I was especially, shall we say, picturesque that day. Good weather always puts me in a dressy mood. I was wearing my new cotton newsboy cap, a greeny-brown summer weight jacket with a fawn waistcoat, a china blue flowered silk pocket square, floral cufflinks, and my pocket watch with that poodle fob that makes me feel like the gay Baron in Remembrance of Things Past. 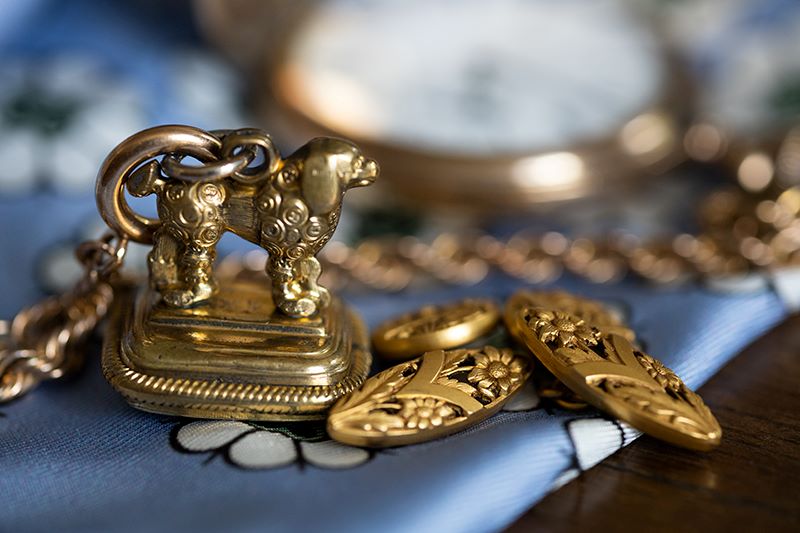 DON’T HATE ME BECAUSE I’M POODLEFUL.

I looked, if I may so, like the first, pale buds of spring timidly breaking forth from the callow earth.

That, plus the knitting, plus the front-row corner seat turned me into a tourist attraction. I might as well have been dressed as Marie Antoinette. By the time I finished working the gusset, at least four other tourists had taken aim at me. One of them was using a vintage Pentax, so I’ll be appearing on a coffee shop wall in Austin, Texas any minute now.

I was waiting for the bill, hoping the waiter would bring it before I ran out of yarn, when yet another photographer slid into view. This one was not working alone. She had an entourage of two—her husband and her daughter, I guessed.

“Will you look at that,” whispered the photographer, stopping so suddenly that her husband ran right into her.

They were maybe two feet from my elbow.

“What?” said the husband. “You could tell me when you’re going to stop, you know.”

“Shhhh,” said the photographer. “Over there. Knitting. A man.”

“I want a picture,” the photographer whispered.

“So ask him,” said the daughter.

“Shush,” said the photographer. “Stand right there while I get out my phone. I don’t want him to see.”

“Just stand there,” the photographer whispered.

“Does he look like he speaks English?” hissed the photographer.

“You don’t have to make a production,” said the husband.

“Shush,” said the photographer. “Stop looking at him.” She had pulled the phone from her handbag, and was trying, awkwardly, to tap the shutter button with one finger while pretending to look in another direction.

“If you would just ask,” said the daughter.

“Can we go, please?” said the husband.

“I almost got it,” whispered the photographer. “Hold still.”

The waiter arrived with my bill. I settled up. He moved on. The photographer and her assistants hadn’t budged.

“One more try,” said the photographer.

I looked straight into her lens, lifted the sock, and smiled.

They froze. The husband and daughter laughed.

“It’s totally fine with me,” I said. “Please go right ahead. I hope you’re enjoying Paris.”

“Are you American?” said the photographer.

“Oh,” she said, stuffing her phone back into her bag. “Nevermind.”

She turned on her heel and started walking away, her assistants trailing behind.

“Sorry,” said the daughter to me.

“If he’s American,” the photographer snapped, “he doesn’t count.”