Paris is, famously, a city that caters to all tastes. Even so, I did a double-take when I saw posters all over the Métro announcing a major exhibition dedicated to the history of sheep breeding.

“La Guerre des Moutons: Le Merinos à la Conquête du Monde, 1786-2021” (The Sheep War: Merinos Conquer the World, 1786–2021) recently closed at the Musée des Archives Nationales (National Archives Museum) after a five-month run in the gorgeous confines of the eighteenth-century Hôtel de Soubise, which is itself worth a look no matter what else is on display.

The painted ceiling over the ceremonial staircase of the Hôtel de Soubise, showing The Allegory of Something or The Triumph of Somebody.

The “war” in the title refers to the scheming, conniving, intrigue and machinations that finally brought several hundred Spanish Merino sheep—the envy of the world—to Louis XVI’s experimental farm (the Bergerie Nationale, or National Sheepfold) in the village of Rambouillet. Spanish wool had long dominated the extremely lucrative market, and the French wanted a piece of the action.

How to do it? Build a better sheep. In 1789, the shepherds and scientists of the Bergerie Nationale began a meticulous breeding program that eventually allowed French Rambouillet Merinos to surpass their Spanish ancestors in both the quality and quantity of wool they produced.

For a fuller account of what happened, I refer you to Carol Sulcoski’s “A Sheep of One’s Own: A Brief History of the Rambouillet.”

Here, I’d like to show you a few of my favorite things from the exhibition—the stuff that really brought the story to life for me.

By great good fortune, I didn’t have to wander the galleries alone. My friend, author Clara Parkes happened to be visiting Paris in early April. We met at the museum before the doors opened, then spent the better part of a morning squealing, gasping, and flailing at everything like the wool-crazed sheep freaks that we are. 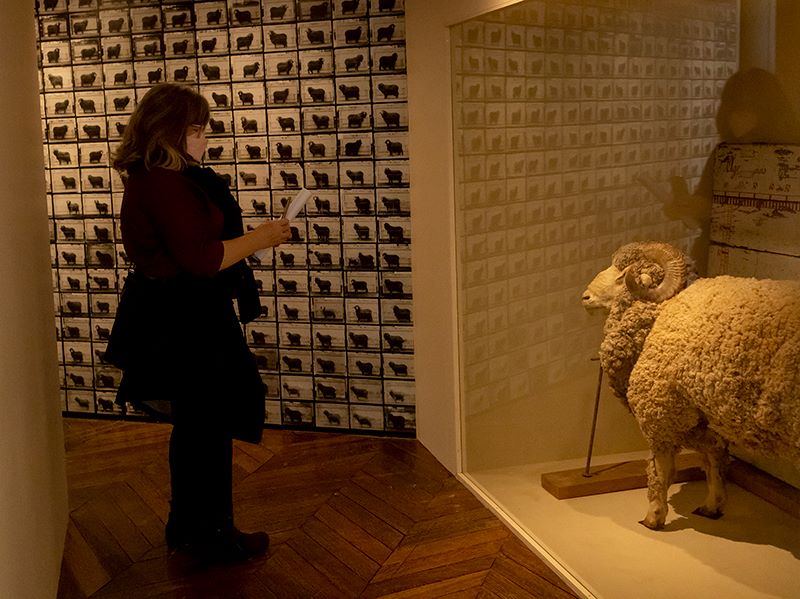 Clara wanted to ride the stuffed sheep. She is the reason for all the protective glass.

This wasn’t a minor event stuck in a basement. It was the headliner, trumpeted by a banner outside the entrance gate on the Rue des Francs Bourgeois. 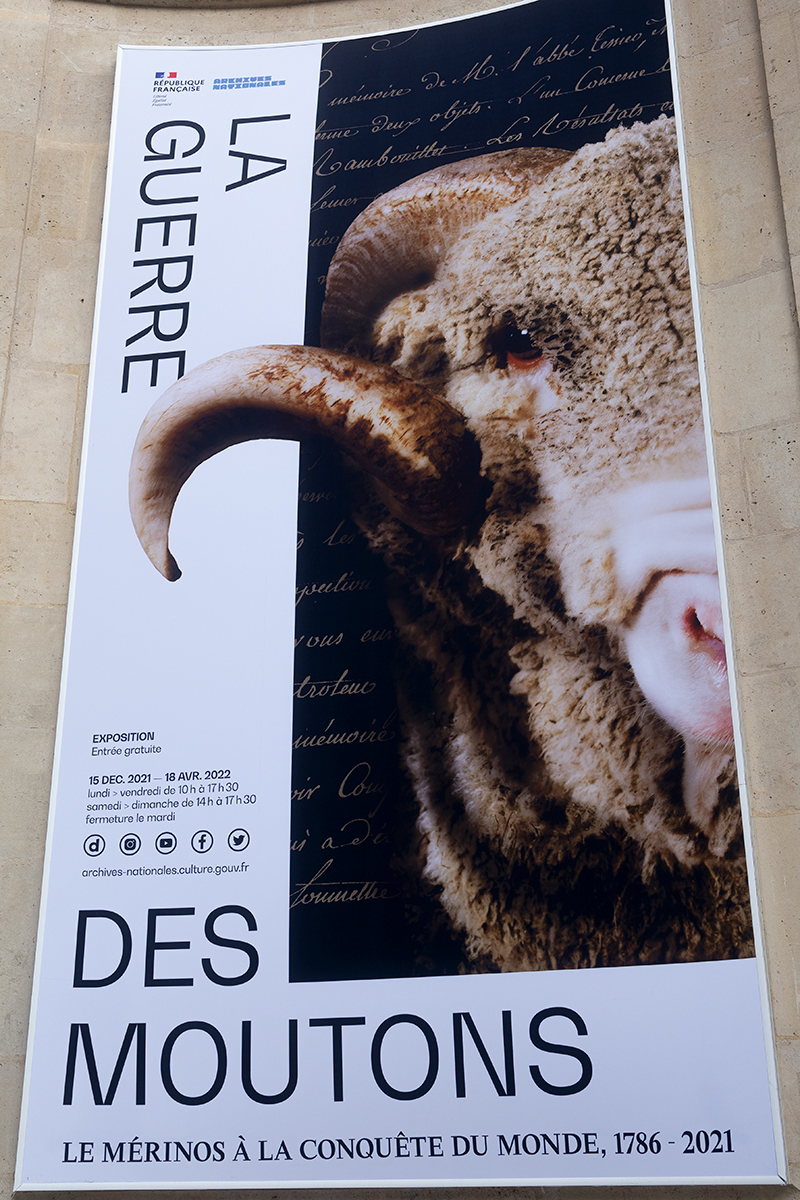 The delightful grandiosity continued in the courtyard, where gigantic images of the Rambouillet lined the colonnade. 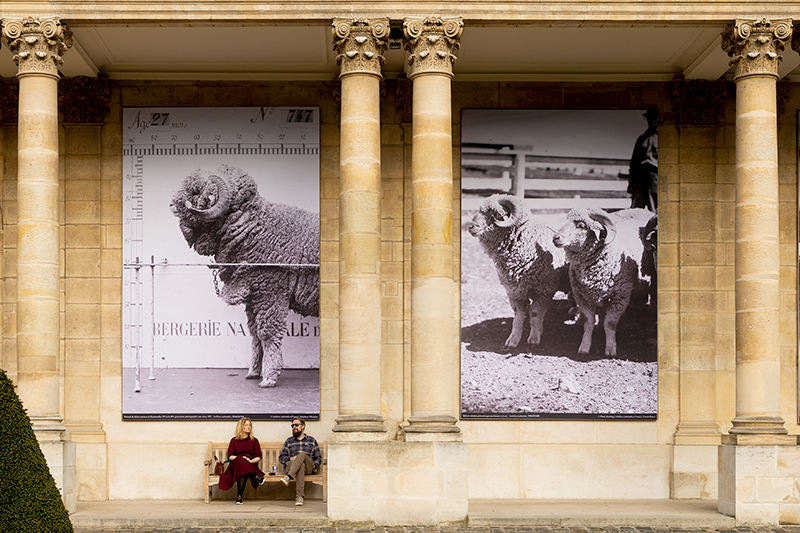 Clara and I were on the point of hyperventilating before we even reached the front door.

As you might expect in a museum attached to an archive, the objects on display were … archival. Rare. Delicate. The rooms were dim, and almost everything was behind or under glass. I urged Clara to use her authorial clout to get the cases opened (she knows how to yell, “Do you know who I am?” in French) but she was too chicken.

That made getting good photographs extremely difficult. I did my best. 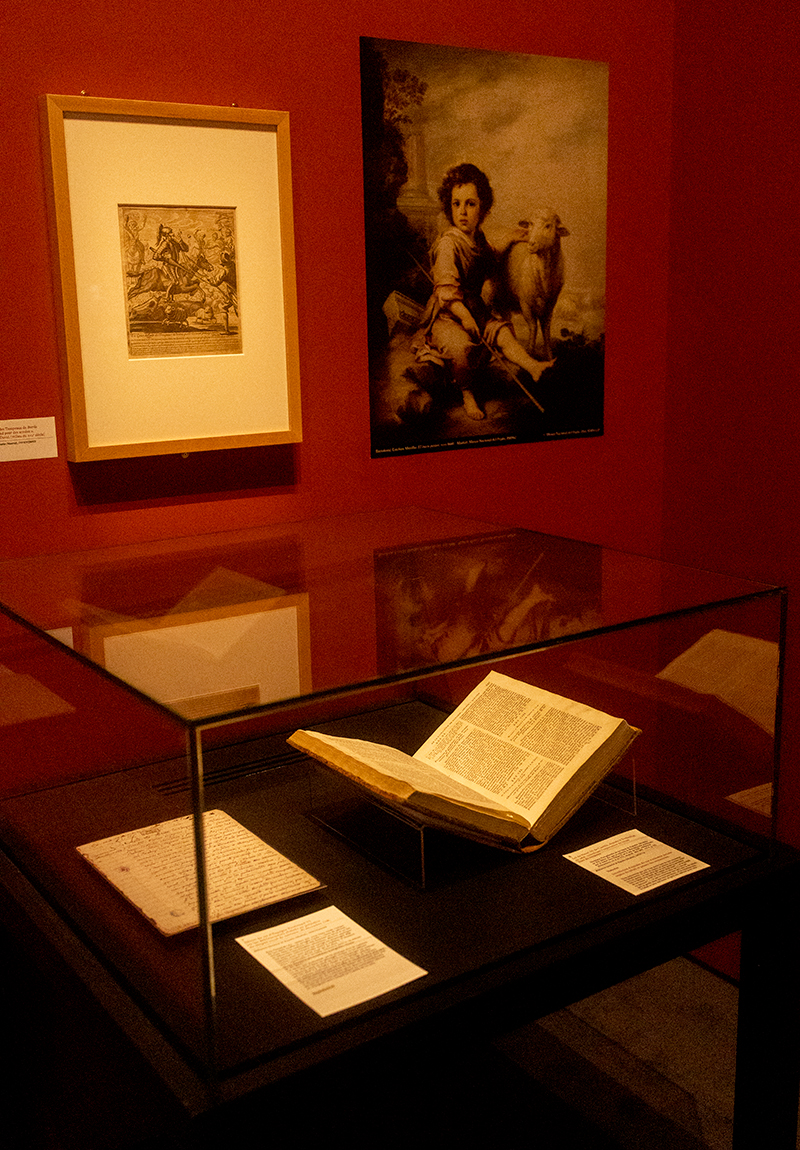 The French obsession with documentation is well known. They don’t like to throw anything away that they can fit in a file cabinet.

It was no surprise, then, to see original paperwork dating back to the beginnings of the Franco-Spanish skirmish over the importation of Merinos. There were letters sent back and forth between kings and diplomats and wonders like this book full of swatches of wool and wool-blend fabrics produced in Amiens and Abbeville in the second half of the 18th century. 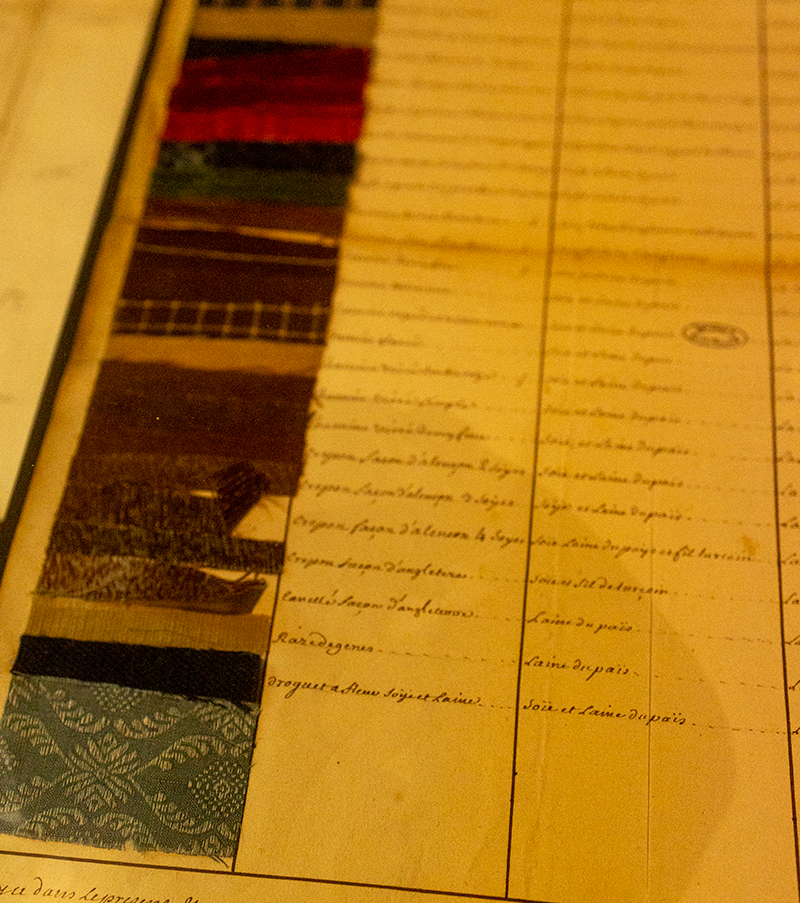 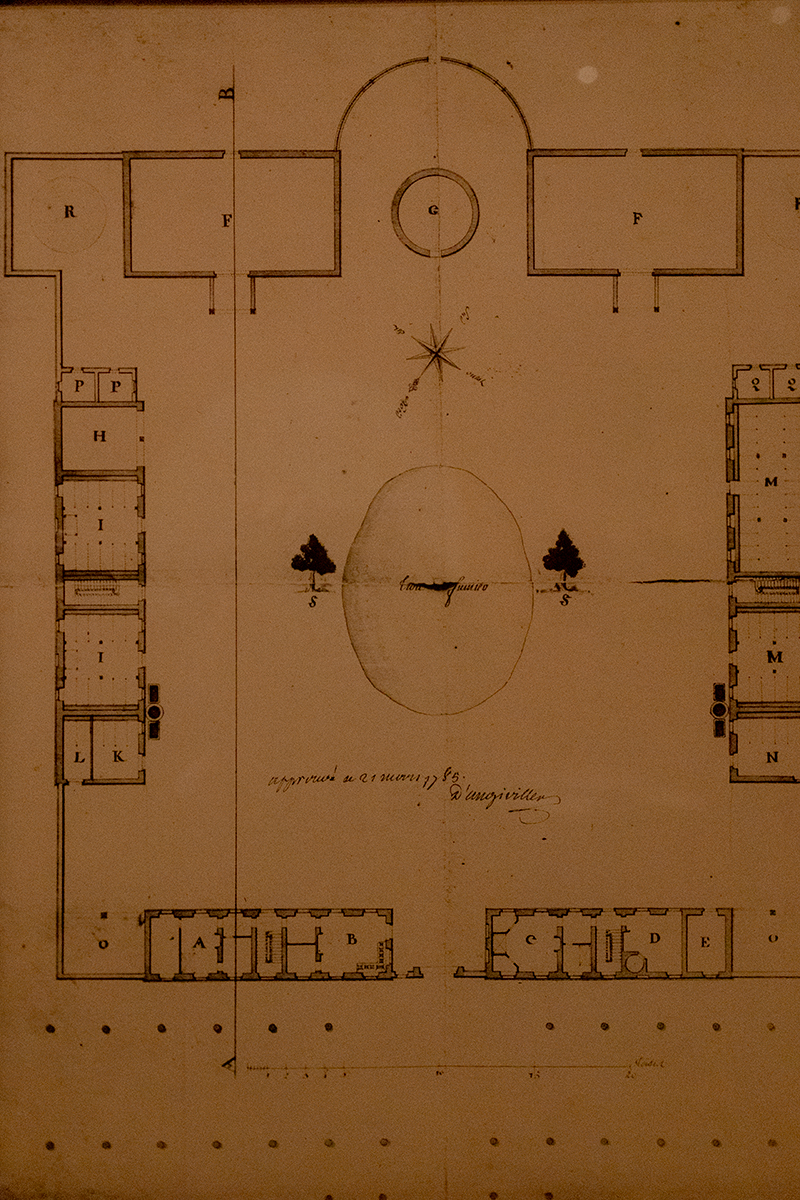 … and a heap of posters announcing sales of Rambouillet sheep from as far back as the 1790s.

This one is notable for offering two dates: the “vieux style” (old style) of June 3, 1797; and “Le 15 Prairial, An V,” the fifteenth of “Prairial,” the ninth month of the Republican calendar in the fifth year of the Republic. The Republican (or Revolutionary) calendar was adopted after the Revolution of 1789 and was used in France until 1805. 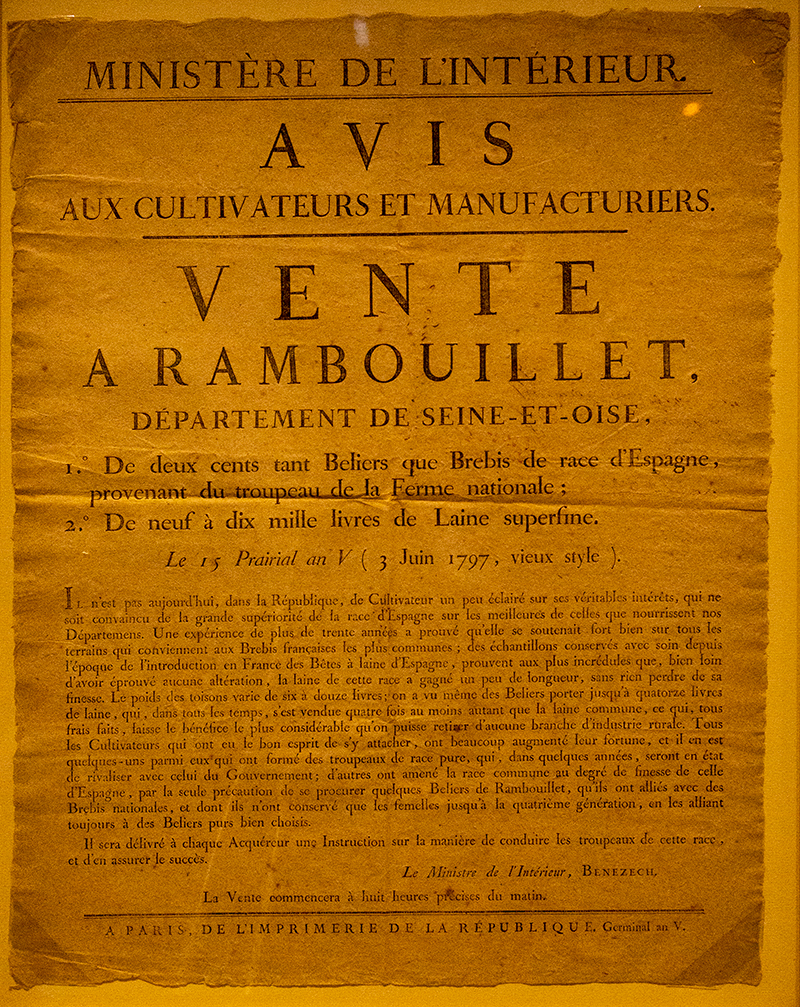 And, from more recent history, detailed dossiers of members of the Rambouillet flock. These, from the 1930s, record each animal in staggering detail, including multi-generational genealogy. 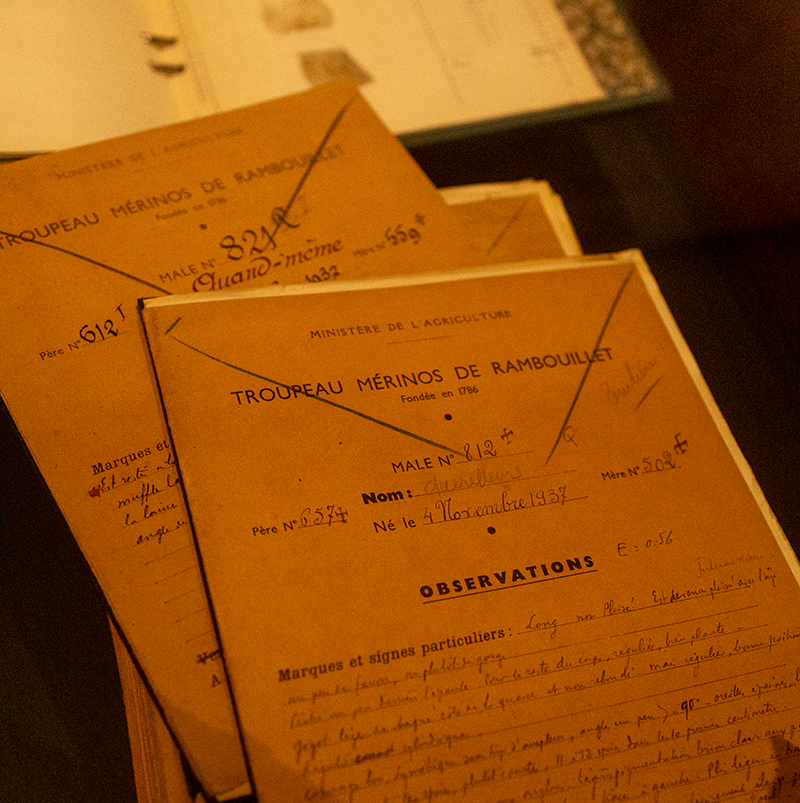 As one who is presently preparing his documentation (200 pages and counting) in support of eventual French citizenship, I admit I am envious that this ram, “Querelleur” (“Aggressive” or “Quarrelsome”) had it all done for him.

And there was entire wall covered by a collage of photographs of individual members of the national flock, taken between 1909 and 1929. An entire wall! 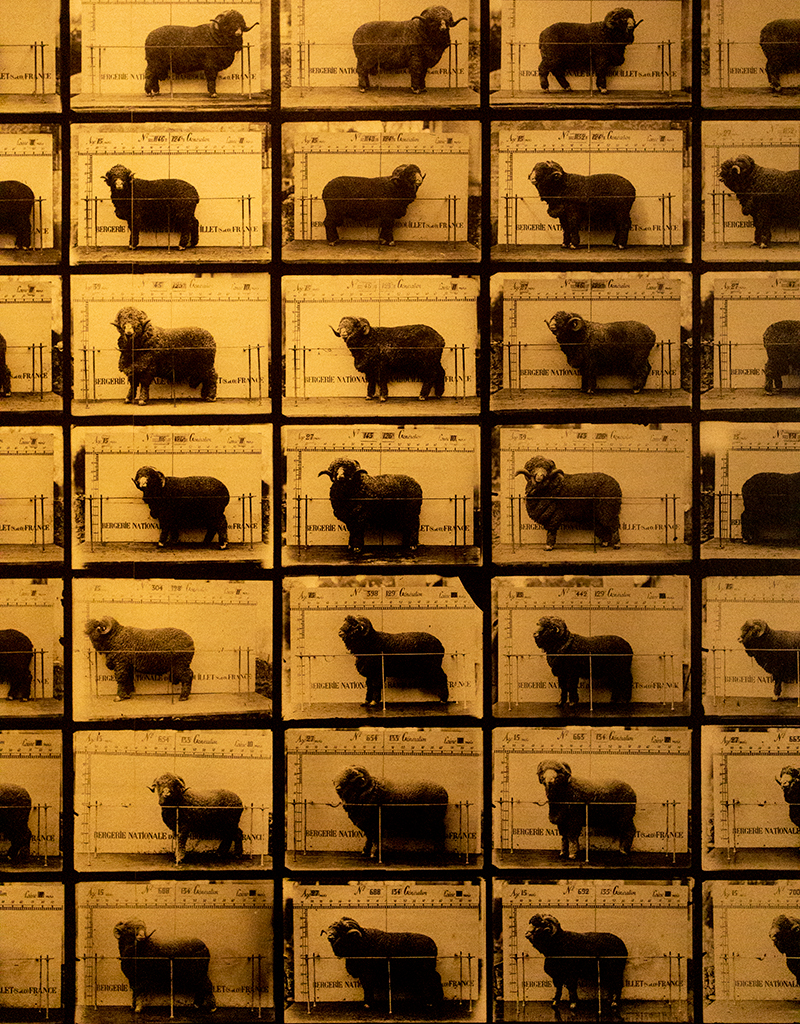 If Clara tells you I checked to see if the collage would peel off and fit in my bag, don’t listen to her.

The curators had also searched libraries and archives all across France for rare copies of seminal French books on sheep farming, like Carlier’s Traité des bêtes à laine, ou méthode d’élever et de gouverner les troupeaux aux champs, et à la bergerie (A Treatise on Wool-Bearing Animals, or A Method for Raising and Herding in the Fields and in the Fold) from 1770 … 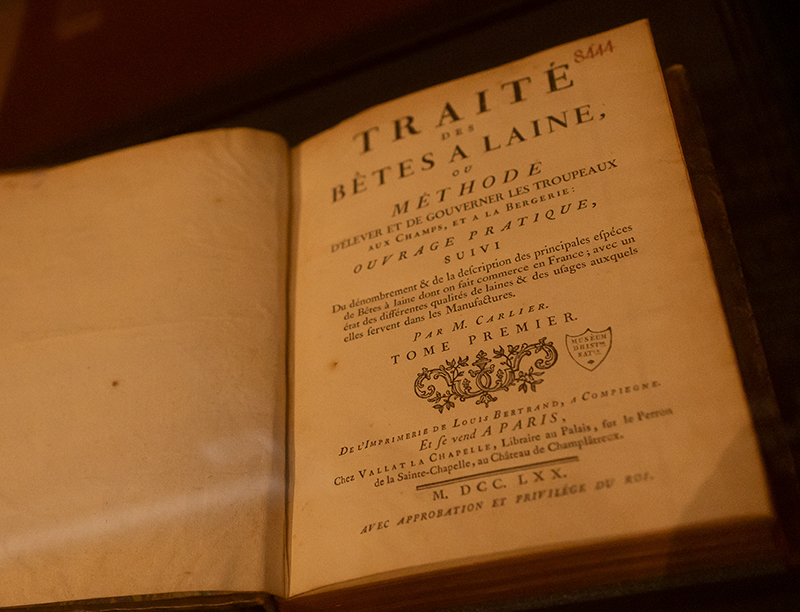 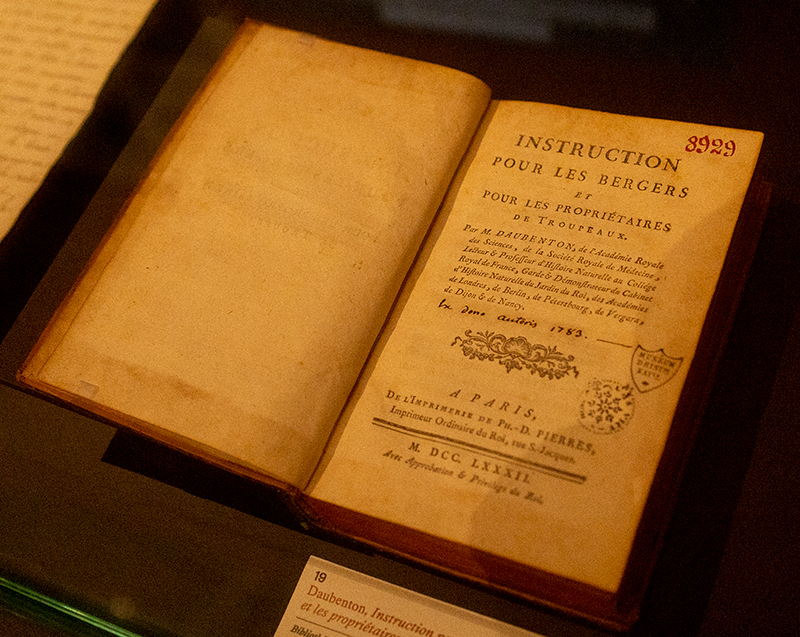 Note Daubenton’s extraordinary list of academic associations: the Royal Academy of Sciences, the Royal Society of Medicine, Lecturer and Professor of Natural History at the Royal College of France, Keeper and Docent of the Cabinet of Natural History of the King’s Garden; [member of] the Academy of London, Berlin, St Petersburg, Vergara, Dijon, and Nancy. No surprise that upon the establishment of the Bergerie Nationalehe became head of the breeding program.

Daubenton’s book also provided two of my favorite images from the exhibition. One showing the shearing process, complete with a guide to creepy-crawlies to watch out for in the fleece … 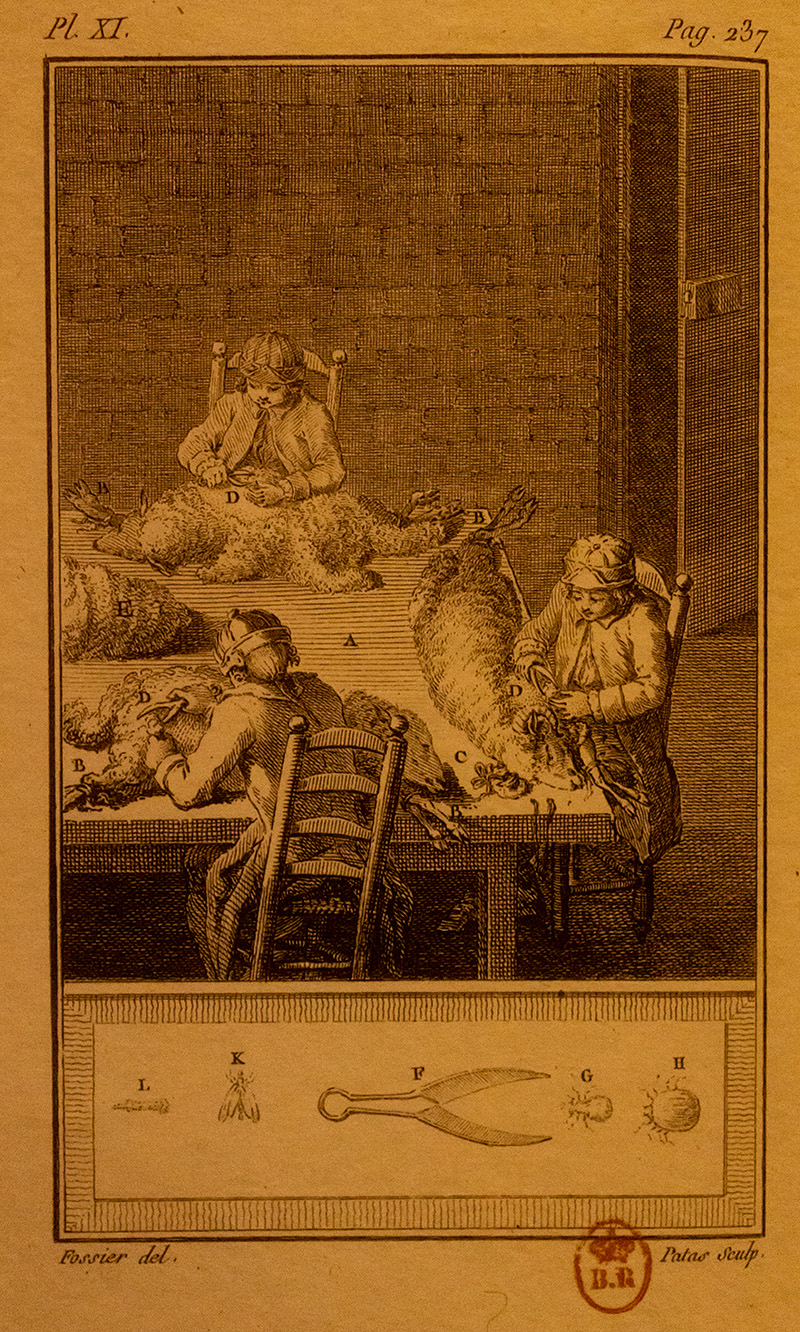 … and one showing a clearly very contented ram getting a bath … 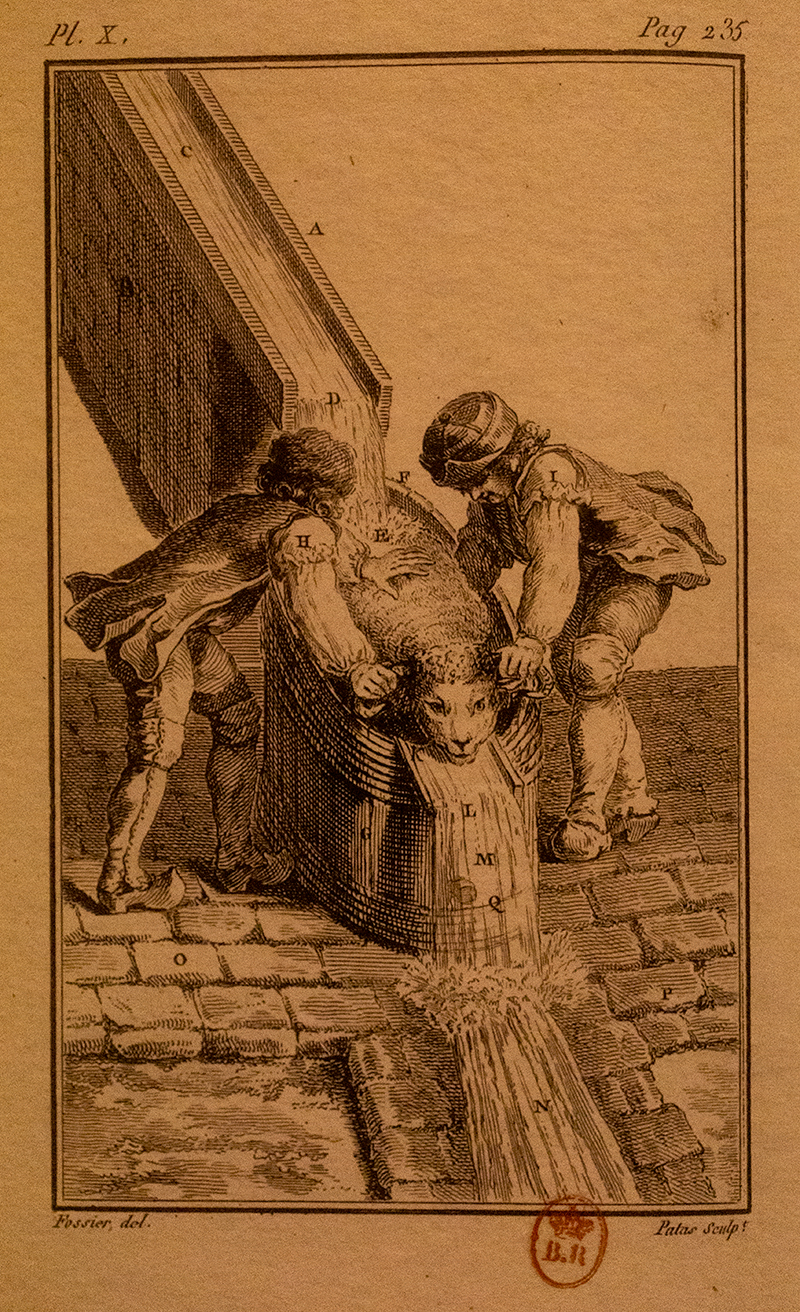 If I were sloshing about in a pool under a waterfall while two burly farmhands rubbed me all over, I’d probably have that look on my face, too.

This Sheep Belongs To …

Of course since those little “Hello My Name Is…” stickers would just fall off, you have to have other, more permanent ways to keep track of which sheep belongs to whom. The stencil used on the flock during the reign of Emperor Napoléon III (the Second Empire) was characteristically elegant, I thought. 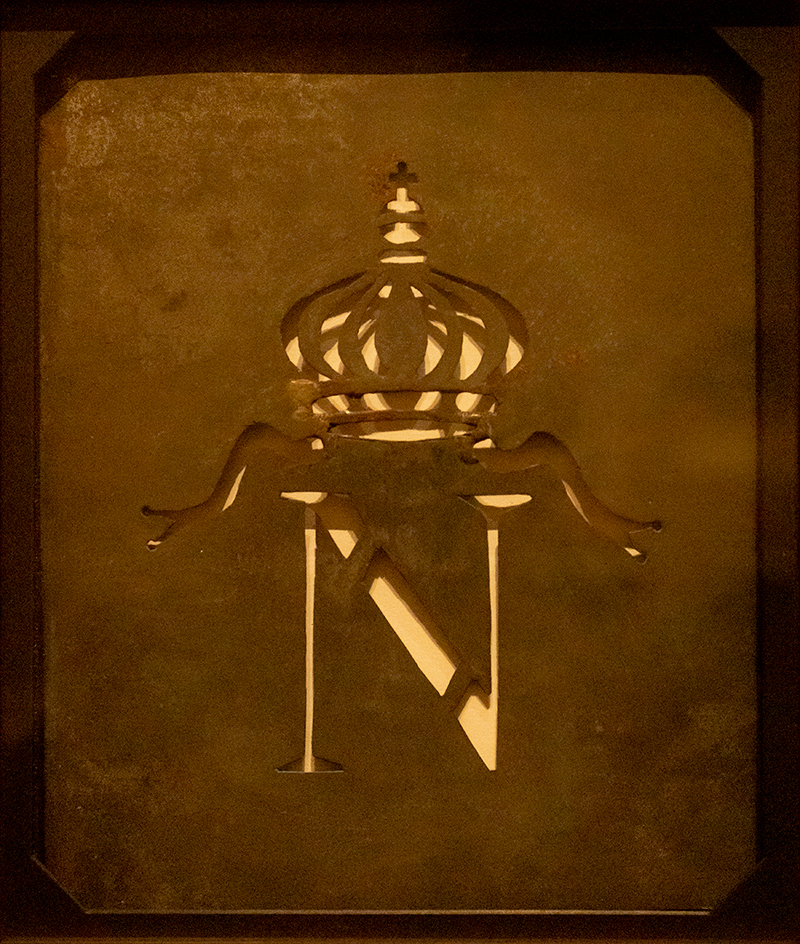 And then there was this rather unpleasant-looking thing, which turned out to be the boxed set of pincers and plaques used at Rambouillet for tattooing sheep’s ears from the Second Empire until 1970. 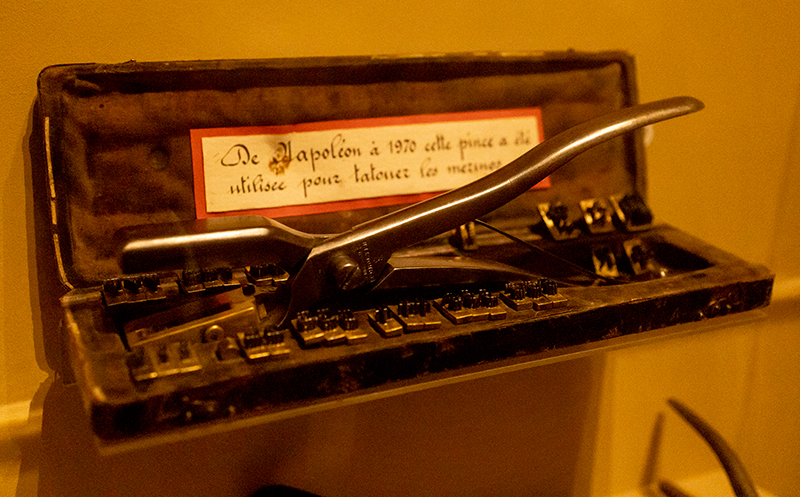 It brought back an unpleasant memory involving my friend Renée and a teen-aged clerk with shaky hands at the Piercing Pagoda at Windward Mall, circa 1988.

Part of the research program at Rambouillet involved sending agents out into the world to gather comparative specimens from other breeds. There were nineteenth-century vitrines filled with vials of wool from other European countries like Prussia … 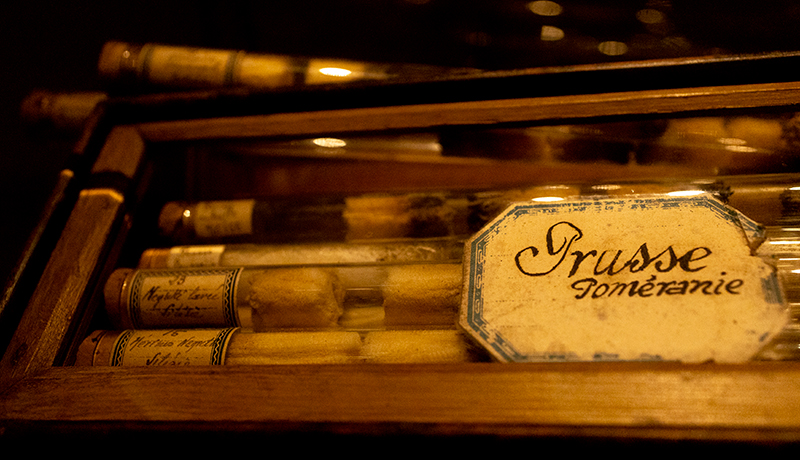 … and from as far afield as Australia. 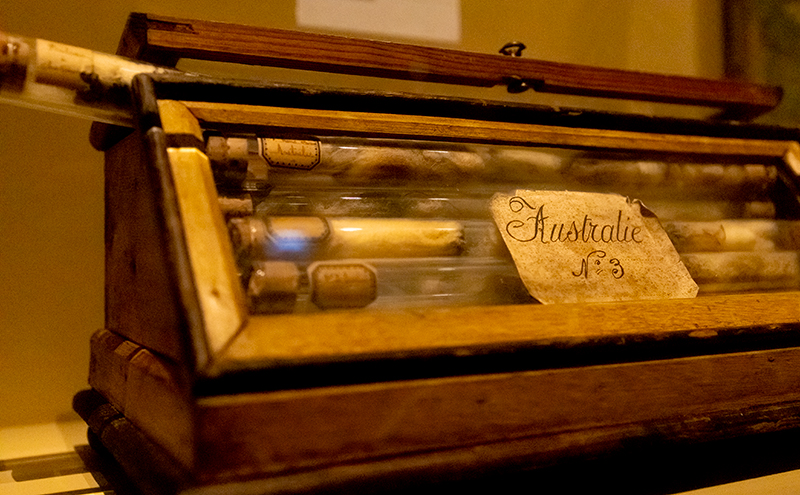 But the most amazing thing, if you ask me, were the display cases showing comparative locks of Rambouillet fleece. They went back to the very first decade of the flock, beginning in 1789 … 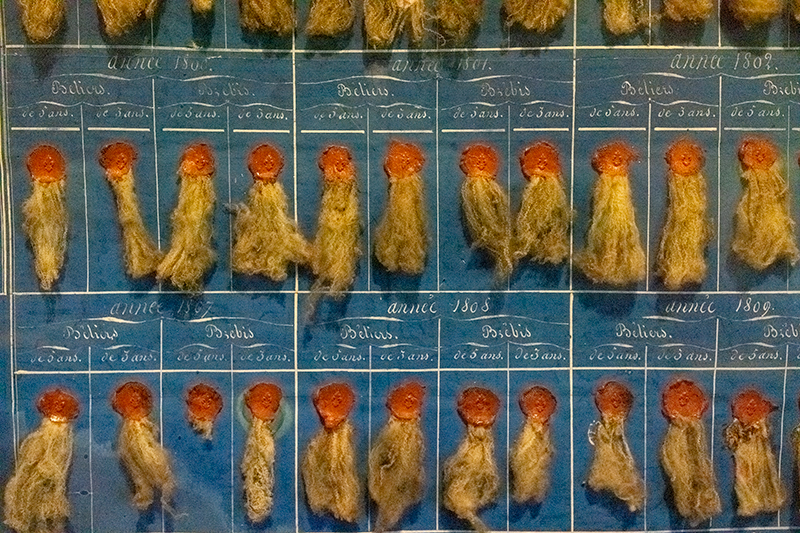 … with each lock affixed to the board by sealing wax … 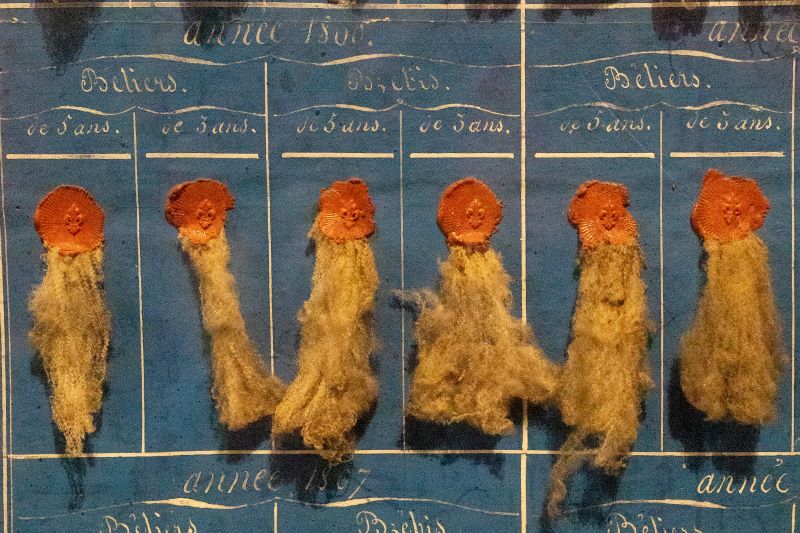 … and continued through the nineteenth century … 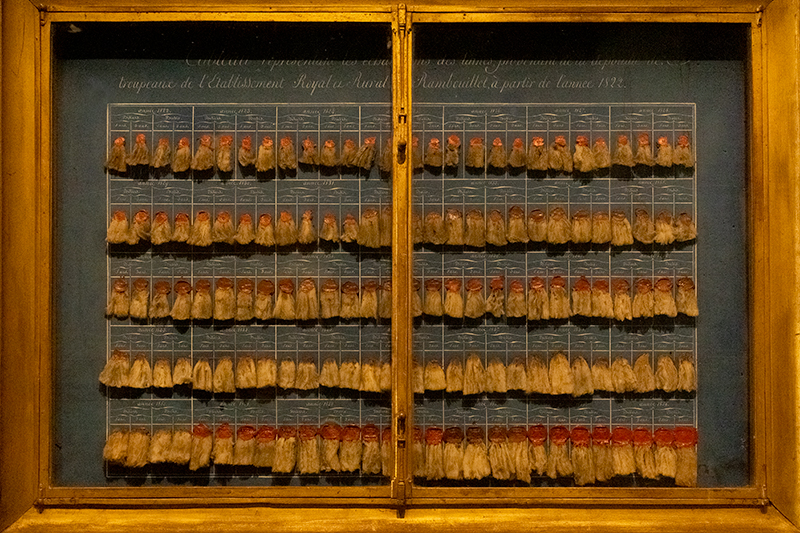 … right into the twentieth century. Sometimes the comparison between years was incredibly poignant. Here, you see the difference between the end of the 1930s (thick and lustrous), and the depths of World War II and its aftermath in 1944–46 (thin and dull). Not even war and occupation could stop Rambouillet from tending the flock as best it could. 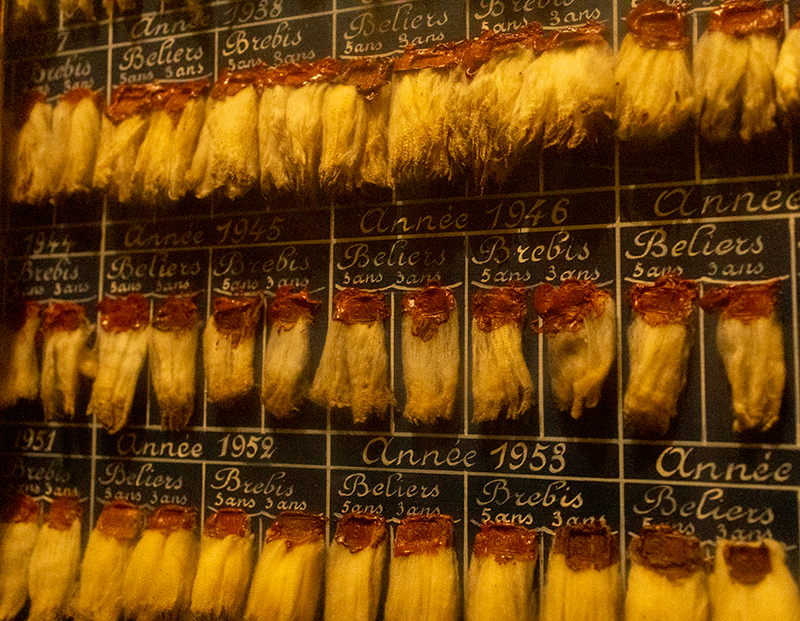 The exhibit was also cleverly fitted out with charming animated videos that helped tell the story. Of course, without the proper permissions I can’t really show them to you here.

This is a still from the bouncy, tongue-in-cheek film explaining the mid-twentieth century method of artificially inseminating ewes. 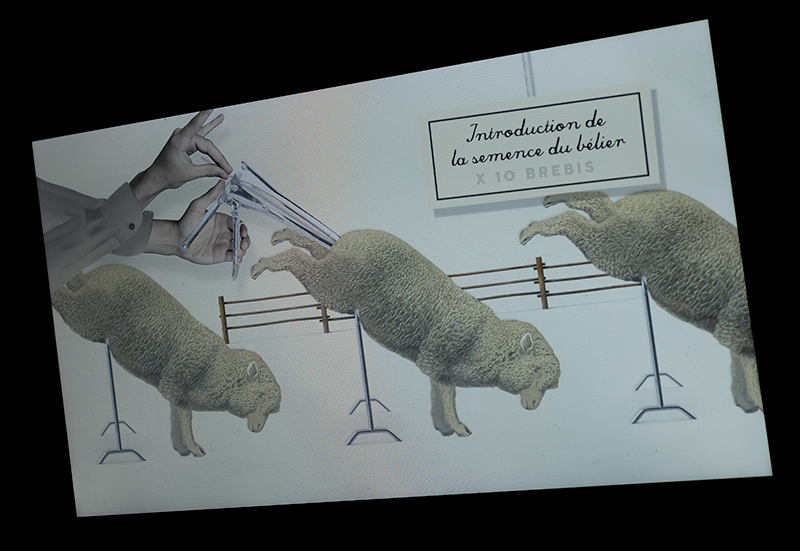 Clara made me watch the whole thing twice.